It’s official; 72-year-old incumbent Carolyn Maloney has won the New York 12th Congressional District Democratic Primary Election over 34-year-old Suraj Patel and has likely won a 14th term as the district’s representative in doing so as a result of the fact that the district typically votes for the Democrat on the ball in the general election, which is set to be held in November.

New York’s 12th Congressional District includes the east side of Manhattan and parts of Brooklyn and Queens.

Maloney won the election soundly over Patel, the hotel executive and former advance staffer for Barack Obama’s presidential campaigns who teaches business ethics at New York University and has never run for office before, despite the fact that many people believed it would be a closer race.

But with all things considered (and by all, there were a lot), it almost seems like Patel was trying to lose. It seemed like almost every week, there was something negative about him surfacing in the news, and some of those news stories were stories that he himself made public. Many of his actions could literally be used in a “How to throw an election 101” course.

Here are a few examples.

First of all, hotels owned by Patel currently face years of labor complaints. Secondly, Patel may have violated an election law leading up to the primary election because of the fact that he spent all but $40,000 of the $1.2 million he raised. However, roughly $200,000 of those donations were designated for the general election, so he was not allowed to spend them on the primary.

Also, huge amount of that campaign money was also raised by people with the name Patel, and Patel himself was questioned over the fact that his voter registration was switched several times over the last few years.

Perhaps even more notable are some of the things that Patel himself has publicly done and said that have been deemed unethical despite the fact that he didn’t seem to see anything wrong with them.

The week before the primary election, it was revealed that Patel and several volunteers in his campaign had been using dating apps such as Tinder to “catfish” and flirt with potential voters.

This practice is actually against Tinder’s rules, yet Patel and his campaign were all for it and even publicized that they were doing it despite the fact that they admitted  that it is a deceitful practice. Patel spent roughly $5,000 of his campaign money on it.

One can only wonder how many of the 16,995 people who voted for Patel did so because of this “catfishing” method.

On the day of the election, Patel was handing out branded condoms to try to get people to vote for him.

Wanna know what’s super sexy? VOTING! Our new #SurajForNY condoms are here! Swing by our office @ 64 Cooper Sq. and pick up one, or two, or however many you might need between now and June 26th. So stop by, get some condoms, some buttons, and some other dope #SurajSwag and let’s spread the word about #VoteJune26

Two of the replies to this Instagram post were “promise rings?” and “top shop?”, which relate to arguably the most eyebrow-raising moment that Patel has had and was used against him prior to the primary election.

Back in August of 2012, Patel met Olympic gymnast McKayla Maroney, who had just gotten back from the 2012 Summer Olympics in London, England after winning a gold medal as a member of the “Fierce Five” United States women’s gymnastics team and a silver medal for her performance in the women’s vault final.

In March, Facebook posts that Patel made about former Olympic gymnast Maroney as a well as a picture of him with her were revealed, and in these posts, he made inappropriate remarks about her.

Here are pictures of these posts. 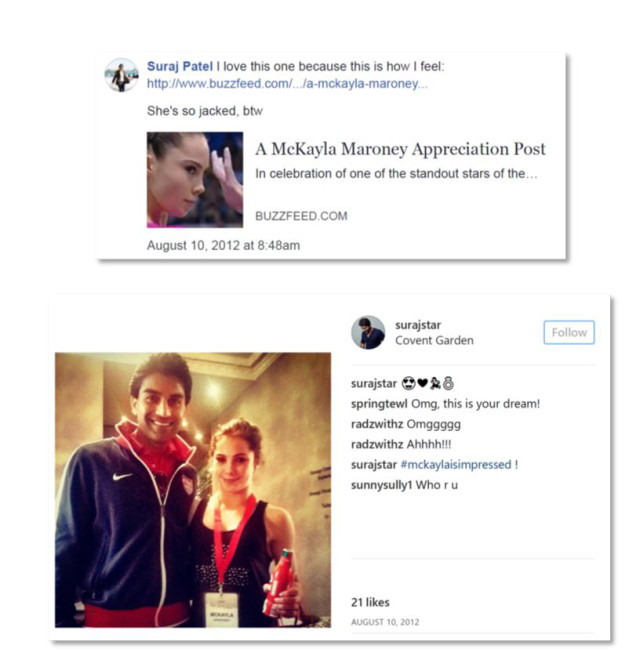 But when these posts were revealed in March and Patel faced the ensuing criticism, Patel claimed that he was “cyberbullied” instead of owning his inappropriate remarks and, at the very least, issuing an apology for making them.

Based on his reaction, it seemed almost like Patel wanted his remarks to “go away” and for people to think he did nothing wrong.

With all of this in mind, it almost seems like Patel was trying to lose to Maloney. Given all of the questions surrounding so many of his actions and remarks, how could he really expect to beat an incumbent seeking her 14th term?