***FAIR WARNING: There are extremely graphic images used in this article!! Do NOT continue if you are sensitive to this type of material!!***

Fifteen years ago today, on September 15th, 2001, just four days after the tragic terrorist attacks on 9/11, former Formula One driver and 2-time CART champion Alessandro Zanardi was involved in one of the most wicked and horrific crashes in the history of motorsports at the EuroSpeedway Lausitz, which is a 2-mile tri-oval located in the village of Klettwitz in the state of Brandenburg in Germany.

Zanardi, an Italian who was 34 years old at the time, was leading the American Memorial 500 at the EuroSpeedway Lausitz when he came to make his final pit stop of the race on lap 143 of 154. When he was exiting the pits, he lost control of his car and spun up through the grass and onto the track. The oncoming car driven by Patrick Carpentier came within inches of slamming Zanardi’s out of control machine.

Unfortunately for Zanardi, that good fortune did not hold true when the car driven by Alex Tagliani, a Canadian who was 27 years old at the time and still races in the Indianapolis 500 every year at the age of 42 (He has actually led laps in the past 6 Indianapolis 500 mile races dating back to the 2011 race), arrived on the scene traveling at a speed in excess of 200 miles per hour.

As Zanardi’s car spun, there was a brief point during which the car was pointed forward but towards the bottom of the track at an angle. At this point in time, Alex Tagliani’s car slammed the front end of Zanardi’s car, resulting in what you can see in the following four images. Note that the reddish/pinkish clumps flying through the air are not pieces of either car, rather they are pieces of flesh from Zanardi’s legs, which were amputated above the knee as a result of this devastating crash. You can watch the horrific crash happen HERE.

Photo Credit: Documenting Reality
The crash was one of the most violent in motorsports history. If you look closely, you can see clumps of Zanardi’s flesh flying through the air.

Photo Credit: Documenting Reality
Here is a close up shot. Zanardi’s flesh is more easily spotted in this one. The whole front of the car was detached from the cockpit.

Photo Credit: Alchetron
Here is a side view of Zanardi’s car at rest. As you can see, much of his legs are no longer attached to his body. 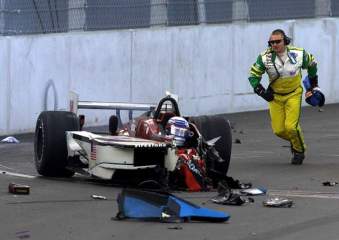 Photo Credit: Documenting Reality
In my opinion, this photo is the most haunting. Zanardi is just sitting there helpless, and from the front, we can see that much of both his legs are gone.

Zanardi was hospitalized and in stable but critical condition following the crash. He did not have significant internal injuries and was breathing on his own (via Los Angeles Times, 9/16/2001). He had a long road ahead of him if he was going to ever recover from this accident. Tagliani, too, was hospitalized, but he had not suffered any major injuries.

But Zanardi was determined. He persevered and powered through the adversity which he faced. Not even 4 years after the crash that nearly took his life, he started racing in the World Touring Car Championship with no legs, where he would partake in races from 2005 until 2009. He ended up winning 4 races in that series as a double amputee! He also competed in the Blancpain Sprint Series in 2014, where his best race result was a 5th place finish.

“I feel very lucky, I feel my life is a never-ending privilege,” said Zanardi (via BBC, 9/14/2016). “At the time I was asked if I would ever step back in a race car, but what was very important for me was to go into the bathroom and pee on my own, but I could not do that.”

Now in 2016, Zanardi, 49, is competing in the Rio Paralympics, and has already won 3 gold medals, his most recent one coming as a result of his victory in the H5 road time trial just one day before the 15th anniversary of his life-changing crash. He also won 2 gold medals in the London Paralympics in 2012.

“Normally I don’t thank God for these type of things as I believe God has more important stuff to worry about, but today is too much, I had to raise my eyes and thank him,” Zanardi stated (via BBC, 9/14/2016).

Zanardi’s remarkable story of faith, hope, strength, courage, and determination among many other things can provide an inspiration for many people, even those who are not dealing with the loss of a limb or limbs. He probably even still finds away to stand for the national anthem, something people of all nations and colors should take note of.