The 1946-47 season was the first season of the Basketball Association of America, or BAA (which you know as the NBA now). Maurice Podoloff was the commissioner of the league, which was founded on June 6th of 1946. You may recognize his name because the Most Valuable Player trophy is named after him: the Maurice Podoloff trophy. Eleven teams played that season, with a schedule that consisted of 60 games per team. Each of these teams took a different path after that first season. Let’s take a look at the 11 original teams and their journeys, whether they ended 7 decades ago, or they’re still going strong:

Boston Celtics
The Boston Celtics failed to make the playoffs in the first season, finishing tied for last in the Eastern Division. However, this result was not representative of the team’s future. By 1969, the team would have 11 championship banners in the Garden. Today, the Celtics lead the league with 17 banners, their last one from 2008. They are one of two original teams that has remained in the same city.

Chuck “The Rifleman” Connors scored 4.6 points per game for the 1947 Celtics. Photo via Bill McCurdy.
Chicago Stags
The Chicago Stags reached the 1947 Finals, where they fell to the Philadelphia Warriors. The Western Division champions had a record of 39-22 in the regular season. The next three seasons, they made the playoffs each year, but folded in 1950. The team pulled off a trade with the Tri-Cities Blackhawks (now the Atlanta Hawks) in 1950 to acquire rookie Bob Cousy, but, because of the Stags folding, there was a dispersal draft, where the Boston Celtics picked him up. The Stags would be the last team to play in Chicago until the Chicago Packers, who are now the Washington Wizards, were formed 11 years later.

Max Zaslofsky starred on the Stags was selected to the 1947 BAA First Team. Photo via Vintage Card Prices.
Cleveland Rebels
Before it was Believeland, Cleveland was the home to the Rebels for one season. The team won 30 games and lost 30 games, and made it to the playoffs. Ultimately, they lost to the Knicks in the first round, losing a best-of-three series. That summer, the Rebels folded after only one season of playing in the BAA. The city would not have another team until 1970, when the Cleveland Cavaliers were formed.

Frankie Baumholtz (shown with Ohio University) was second on the Rebels in scoring with 14 a game in 1947. Photo via Peach Basket Society
Detroit Falcons
The Detroit Falcons went 20-40 in their lone season as a team in the BAA. The team failed to qualify for the playoffs, finishing with the fourth best record out of the five teams in the Western Division. In the offseason, the Falcons folded. Detroit had no team until the Fort Wayne Pistons moved to Detroit in 1957.

Stan Miasek scored nearly 15 points per game for the Falcons, en route to an All-BAA First Team. Photo via Vintage Card Prices
New York Knickerbockers
The New York Knicks are the other team that has stayed in the same city since the inception of the league. They were the victors of the first game in NBA history, a match-up against the Toronto Huskies. Guard/forward Ossie Schectman scored the first basket. In the first season, New York won 33 games and advanced to the semifinals, where they lost to the eventual champions Philadelphia Warriors. In its history, the Knickerbockers have won two championships: in 1970 and 1973. 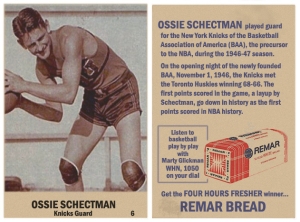 Ossie Schectman scored the first basket in NBA history on November 1st, 1946. Photo via Joshua Platt
Philadelphia Warriors
The Philadelphia Warriors won the very first NBA championship, even though they finished 14 games back of the Washington Capitols. Led by Joe Fulks, they defeated the Chicago Stags in the Finals. In 1962, the Warriors moved to San Francisco, California. Nine years later, the team became the Golden State Warriors after moving to Oakland, where they remain today. Including the 1947 championship, the Warriors have four Finals wins in their history. Only a year after leaving Philadelphia, the Syracuse Nationals changed ownership and they moved to replace them in the City of Brotherly Love, thus creating the Philadelphia 76ers.

Joe Fulks led the league in scoring and carried the Warriors to the first-ever championship. Photo via Pro Hoops History
Pittsburgh Ironmen
The Ironmen did not have much success. In the 1947 season, the team went 15-45; they were the last place team not only in the Western Division, but also in the entire league. Although there wasn’t very much to look at as positive during their short stint as a team, they did have the first siblings to play on the same team (Roger and Noble Jorgensen), and “Press” Maravich, the father of former NBA star Pete Maravich, suited up for the squad as well. After that first season, the team went defunct. No team has played in the city of Pittsburgh since.

The Ironmen’s leading scorer, Coulby Gunther (shown while playing for Mitchel Field), checked in with over 14 points per game in 1947.
Providence Steam Rollers
The Steam Rollers entered the original season and seeded fourth in the Eastern Division, missing the playoffs, with a 28-32 record. However, the next season, the team set a record that nobody wants: the least wins in a season. The team won only 6 of their 48 games, finishing last in their division. The 1948-49 season would be their last, and they finished with a 12-48 record. The team also set one more record: oldest player to ever suit up. Coach Nat Hickey activated himself for one game at the age of 45 years and 363 days, scoring two points while going 0 for 6 from the field. No Big Four sports team has returned to Rhode Island since the Steam Rollers folding in 1949.

Ernie Calverley led the 1947 Steam Rollers in scoring with 14.3 per game. Photo via BMW Cards.

St. Louis Bombers
The Bombers were the western-most team in the BAA’s first season. To put that in perspective, that’s over 2,500 miles from the Pacific Ocean. The team finished with 38 wins in their first season, good enough for second in the Western Division, although they were eliminated by the eventual champions Philadelphia Warriors in the first round. They advanced to the semifinals the year after that, only to fall once again to the Warriors. In its third season, the Bombers had a losing record for the first time, but still made it to the playoffs, only to be swept 0-2 in the first round. In the Bombers’ last season, they won 26 games and failed to qualify for the playoffs. That offseason, the St. Louis Bombers folded. After five years, the Milwaukee Hawks moved to St. Louis, where they stayed for 13 years, when they moved to their current home: Atlanta.

John Logan led the Bombers in scoring with 12.3 points per game in the 1946-47 season. Photo via Vintage Card Prices.
Toronto Huskies
The Toronto Huskies lost the first game in NBA history to the New York Knicks. With a 22-38 record, the Huskies did not make the playoffs. After that season, the team folded after only one season of play. However, in their short time in Toronto, the acquired the first seven-footer to play professional basketball: the 7-1 Ralph Siewert. Siewert only had 20 points and 4 assists in his 21 games played; he didn’t even pick up a rebound. The Toronto Raptors currently play in Toronto and have worn retro jerseys honoring the Huskies.

Leo Mogus was second on the Huskies in scoring (shown with the Baltimore Bullets). Photo via PSA Cards.
Washington Capitols
In the 1946-47 season, no team had a better record than the Red Auerbach-led Capitols, who posted a 49-11 record. But this regular season success did not translate to the playoffs, where they lost to the Chicago Stags in the semifinals. In the 1947-48 season, the team dropped to a 28-20 record and lost a tiebreaker to the Stags.  The next season, the Capitols started off fast, winning their first 15 games (a record that would stand until the Warriors won 24 in the 2015-16 season. Washington ended that season with 38 wins and 22 losses and advanced to the BAA Finals, where they fell to the Minneapolis Lakers. Then, in 1949-50, the team finished with its first losing season. In the 1950 offseason, the Capitols selected Earl Lloyd with the 100th overall pick in the draft. When he played the season opener, he became the first African-American to play in the NBA. However, 35 games into the season, Washington folded, leaving the District of Columbia without an NBA team until the Baltimore Bullets became the Capital Bullets in 1973.

“Bones” McKinney scored 12 points per game for the Capitols in 1947 before going on to become a successful college coach, making the Final Four while at Wake Forest.